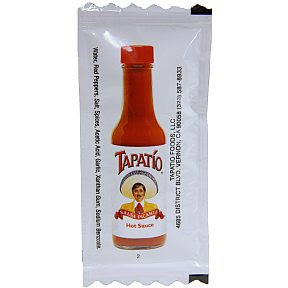 Maybe my wife and I are the only people in the world who would do this, but have you ever married the spokesmen of various products? I don't mean literally - taking the Brawny Man and Betty Crocker to a priest and having him marry their images or anything, but just having them be married in your mind. The above pictured combination is just one of the ones we've done. The Tapatio man and the Cholula lady just seemed like a good match. They're both Hispanic, they're both into hot sauce, and the Tapatio man has a killer sombrero. Well, I have to go marry off Mrs. Butterworth to Mr. Clean!
Posted by Beau Sorensen at 5:13 PM 1 comment:

Who Puts Soup in the Freezer!?

As an April Fool's Day treat to you, the loyal 1 people who come here, I have a story from hallowed antiquity (i.e. 3 years ago). At the time, I was still living with my parents, and I was tending my sister, who was needing tending because of her tendencies to perform unsavory acts with certain humps, who shall remain nameless. Anyway, I was looking for a quick snack, along the lines of a Jell-O Pudding Pop™ or a small parakeet. So, I opened the freezer, and out slid a frozen can of Campbell's Chunky Soup, as hard as a rock. So it fell on my toes, and as a result of the force of the violent pincing action of the tile floor and the solid soup, it broke them. After writhing in agony for a while, I took a closer look at the offending can. It was partially eaten. So whoever (and nobody's ever fessed up to this) decided to have some soup thought that instead of doing something normal like oh, putting it in a container and then into the fridge, that they would perch it precariously in the freezer as some sort of medieval booby trap.
So I ask you again...who puts soup in the freezer?!
Posted by Beau Sorensen at 9:21 AM No comments: