We're On The Same Wavelength!

The governor of Oregon and I think alike apparently - we both think that the gas tax should be eliminated and a usage fee should apply to miles driven, regardless of gas mileage.  He proposes using GPS to do it, and I think that's not a bad solution.  Ideally, I would not just use a flat amount for the calculation, but rather a combination of rates.  For example, you could charge 2 cents a mile on the freeway or 1 cent for surface roads.  You could also vary it depending on what you wanted to do.  If you wanted to route traffic to main thoroughfares, charge more for back streets.  Reverse it for the opposite effect.  I think the applications are endless and the money could actually be used to pay for fixes on the very streets that cars are using.  Of course, GPS would need to be a bit more accurate - it wouldn't be fun to be driving on a frontage road and expecting to get charged a penny a mile but then get nailed for the 2 cents a mile on the freeway that's 20 feet away.
Posted by Beau Sorensen at 3:01 PM 3 comments:

This is tangentally related to a post Forro made way back when, but Provo women are back in the news, and not in a good way.  We're now the home of the people who want to allow breast feeding pictures on Facebook.
First of all, I would like to know what all the fuss is.  I'm all for providing places for women to breast feed, indeed, those little kids have to eat.  My kids wouldn't have been happy if they just had to sit there and cry because my wife couldn't take care of business with them.  However, just like with everything else, there is a time and a place for everything.  The time and place for breast feeding isn't in the middle of a crowded restaurant (without cover), on Facebook, or while you're being interviewed by CBS Evening News.  Instead, just like many other bodily functions, you should exercise discretion.  Just because peeing is a natural bodily function, you don't see me slapping that all over my Facebook profile.  Also, beyond the discretion argument, how about the one where you let people make the rules whereby you can play in their sandbox?  If you want to play there, you can, but if you break their rules, you'll be booted out.  If you don't like it, go somewhere else.  I'm sure that Breastbook would be happy to have you.
Posted by Beau Sorensen at 9:39 AM 2 comments:

How to create a black market

Charge $7.50 for popcorn and $4.75 for a drink. Those theatre prices sent me to the restaurant across the parking lot where I could smuggle water in for a buck.
Posted by Beau Sorensen at 6:42 PM No comments:


You too can be the first to own this fantastic piece of history. Feel free to put it in the most prominent place you can think of to look at and think how amazing your life is with President Obama almost in office and this trinket in your life.
I seriously nearly fell off the elliptical machine when I saw this on CNN last night. Enjoy!
Posted by Beau Sorensen at 4:06 PM 3 comments:

For the Serious Fast Foodie...

You can now scratch off the serious Whopper lover on your Christmas list because as part of one of Burger King's ongoing viral campaigns, you can get an honest to goodness BK cologne.  Whether it's got actual flame broiled smell in it or not is another question all together, but at $3.99, isn't it worth buying just to see?
Posted by Beau Sorensen at 8:45 AM No comments: 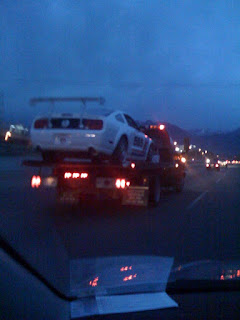 Here's a submission from Forro.  I'm tempted to start a series called Tailpipes Gone Wild after seeing an epic tailpipe.  Nevertheless, this is a good one.
Posted by Beau Sorensen at 6:05 PM No comments:


This is the Japanese broadcast of what happened for those who speak the Japanese...all I can say is wow.  How 3 people were killed by foot massagers of all things is beyond me.  I can see machetes, guns, and bombs, but this?  I guess it's only a matter of time until DARPA gets their hands on this technology.
Posted by Beau Sorensen at 9:03 AM No comments:

It's All About Me

When I say me, I mean the execs at our company. I've been in a meeting that was going well until we got talking about the company's holiday party time.  We typically have it at 5 on a Friday because everybody pisses and moans about giving up a Saturday.  We've been in a discussion for the past 30 minutes about the time for the holiday party.  The concern of course is the needs of the many versus the needs of the few.  By the few, I mean the one guy who has been hammering this thing against sense because the man can't be on time to save his life.  Not only that, but he doesn't like dinner at 6.  Therefore, we should all conform to his desires and wants.  As a result, 5 just isn't good because he can't make it (not that he'll make it at 5:30, which is the new revised plan right now, anyway).  Yeah, he's THAT important.
Posted by Beau Sorensen at 12:25 PM 1 comment:

We Wish You a Merry Christmas seems like a nice enough Christmas song, until you get to the second verse. Then these happy carolers suddenly become the guests from hell. First they demand figgy pudding for their singing, then they stage a sit-in when you tell them no. I really don't see how this became a classic with the proletarian message that it espouses.
Posted by Beau Sorensen at 7:17 PM 1 comment:

I've been a bit busy with not blogging the past week, but I did want to comment on what happened in Mumbai last week.  For those who don't pay attention to the news (and I don't blame you if you don't - between the blowhards on Fox and CNN and the raving lunatics on MSNBC, it's easy to avoid), Muslim terrorists attacked 10 targets in Mumbai and killed close to 200 people, focusing on high value targets: the rich and the Jewish.
The Indian Special Forces were, to put it bluntly, a joke.  I think that there is one lesson to learn from the post-9/11 world: terrorists are not there for hostages.  You might get an actual HT in other situations, but terrorists are there to do one thing and one thing only: kill as many as they can.  They might have some that they keep around as shields, but the tactical units that respond to these situations need to have that clear.  Every second that they delay their counterattack is a second closer to a dead hostage.  This new generation of terrorists has actually made things difficult for any traditional groups.  I can't think of a situation where I wouldn't resist until they killed me or I subdued them.  I might try the hiding route, but I don't know how long I could do that.  Even John McClane couldn't hide forever.
I don't know why the Indians decided to wait so long to storm the buildings, but that should be a lesson to every other government out there to pounce on terrorists as soon as it is tactically feasable.  As agents Johnson would agree, a loss of a percentage of hostages is regrettable, but livable.  You will end up saving fewer if you don't take care of it as soon as possible.
Posted by Beau Sorensen at 3:48 PM No comments: