Why We Should Let Millsap Go

I really like Paul Millsap...I really, really like Millsap.  He's a solid player, he's an incredible worker, and he has a great nose for the ball.  At the same time, with the reports all saying that his agent is looking for David Lee money (approximately $50 million for 5 years), I'm all for saying goodbye to him.  That is a contract that is a mistake on so many levels.  AK-47's contract would look downright livable in comparison (okay, that's inaccurate...his contract is an albatross that I would love to get rid of, even if we ship him and the 2010 #1 from the Knicks to the Cavs for Shaq).  The bottom line is that there was some level of tension once Boozer and Millsap were back and healthy that I think negatively impacted the team over the home stretch.  It shouldn't have, but there was definitely a level of Alpha-dogism that went into our collapse.  You aren't going to pay someone that kind of money to sit on your bench.  I know he's a great worker, but even if he wasn't just sitting on the bench splitting time with Booze, I still couldn't pay that.  I think he's a bargain for mid-level exception money, but when he's looking for superstar level money (especially with half the league looking for any way to save money), he's extremely overpriced.  The Pistons or the Grizzlies might take a chance on him, and they might make a great choice.  At the same time, a lot of people thought the same thing about Andrei Kirelinko a few years ago and now he's one of the most untradable people in the NBA who aren't on the Houston Rockets.
Posted by Beau Sorensen at 4:16 PM No comments:

Email ThisBlogThis!Share to TwitterShare to FacebookShare to Pinterest
Labels: sports 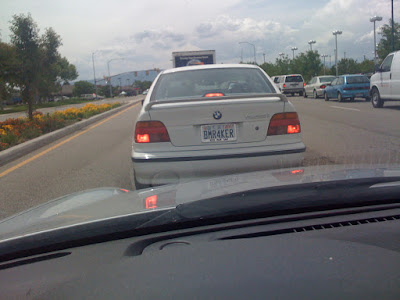 Take a look at this license plate and see if you can tell me what it's supposed to be.  If you can't see, it's BMR4KER.  My first thought was "Bum raker?  What's a bum raker?"  It could be "Bimmer for Ker" maybe if the e is given an "a" sound, that might work, as long as the owner is someone like Kerry.
Posted by Beau Sorensen at 4:53 PM 1 comment: 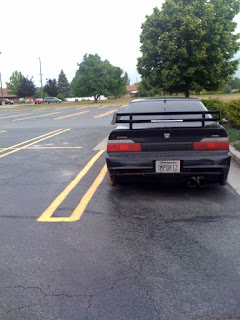 I propose that new proposed universal health care that the US is going to try to adopt should be called Medicall because we'll all be getting it.  Besides that random point though is that Medicall doesn't make a whole lot of sense.  "By spending this money, we're going to be saving money!"  I suppose that if you buy a couple of candy bars now, you won't have to buy a cheeseburger in an hour, but that doesn't mean you'll be saving it.  With the unfunded Medicare benefit currently projecting at around $50 trillion, adding a lot of people to the rolls seems like the opposite of what we should be doing.  Dan Henninger had a great article about it in today's WSJ:

Whatever Medicaid's merits, this federal health-care program more than any other factor has put California and New York on the brink of fiscal catastrophe. I'd even call it scary.
Spending on health and welfare, largely under Medicaid, makes up one-third of California's budget of some $100 billion. In New York Gov. David Paterson's budget message, he notes that "New York spends more per capital ($2,283) on Medicaid than any other state in the country."
After 45 years, the health-care reform called Medicaid has crushed state budgets. A study by the National Governors Association said a decade ago that because of "new requirements" imposed by federal law -- meaning Congress -- "Medicaid has evolved into a program whose size, cost and significance are far beyond the original vision of its creators."

That being said, it does look like we're stepping back from it a little bit, but let's face it: this is no solution.  Until we get people to be more responsible for their own health, either through moving everybody's insurance to Geico (i.e. auto-insurance style where you pay higher and do it individually) or through a complete revamp of the whole third-party payer system, we're never going to start saving money on medical expenses.
Posted by Beau Sorensen at 8:29 AM 2 comments:

The Insanity that is Paris Traffic


(move to around 6:30 in the video for the pertinent clip)
So I drove in Paris on my recent trip to Europe, and it's some of the craziest stuff I've ever seen.  What's crazier than anything else though is the traffic circle around the Arc de Triomphe.  Let me give you a little bit of a feel for it.  We came into the city on a road with 4 lanes of traffic going each direction.  Once you pass the Arc, it turns into the Champs Elysses.  This road intersects with 3 other major roads of at least 2 lanes each direction at the Arc, creating an absolute mess.  There are no "lanes" inside the circle, it's just one continuous stretch of asphalt.  As a result of this brilliant city planning, I had driven into a situation the likes of which I may never see again.  It was like the wild west of vehicular travel.  I tried to go around to my street in an orderly fashion, going around the outside of the circle.  While I was doing so, I had to dodge cars that would beeline from their respective roads into somewhere around the center of the circle, make a tight turn around the Arc, then beeline right back out.  There weren't rights of way, there weren't any rules, it was just every man for themselves in a massive free-for-all.  My wife was laughing at the insanity the whole time as I just tried to avoid getting hit.  We made it out alive, and I think there has to be a better way to do it.
For example, in many intersections in Paris there's a through traffic tunnel and local traffic split-offs.  Why not at least put the Champs Elysses right under the Arc?  You can route some traffic onto the circle, but a good part of that traffic is going straight.  Punch it into a tunnel that doesn't have to go through the circle.  You could even make it a standard intersection with the streets that are perpendicular to it.  Have a standard intersection below it and you could probably eliminate 30-40% of the traffic that is overloading the Arc's traffic circle.  Then it might not be such a madhouse.
Posted by Beau Sorensen at 8:17 AM 1 comment:

The Power of the Influencers

Engadget just reported that AT&T caved in to pressure, either real or perceived, from iPhone customers and has opened the upgrade window for those who are upgrade-eligible to the new iPhone 3G S (including yours truly) to tomorrow.  Now I can sign up for some more Apple-y goodness and AT&T keeps me more than happy.  There has been some whinging that it's just for these Apple fanboys and their patron saint, St. Steve, but I think this is a shrewd move.  People aren't used to having to wait for anything other than the masses to get their Apple products, and there was an undercurrent of "AT&T is awful" at WWDC.  Because of that, for AT&T to offer a mea culpa and give Apple's loyal (and vocal) customers a bone is a big thing for them.  I'm sure it will help when it's time to renew their contract with Apple and keep the exclusivity that is really a no-brainer for both parties until LTE comes out and Verizon moves over (because there's no way Apple will build a niche product like a 1xRTT iPhone when so few cell customers use it).  Maybe it will help people be a little less critical of AT&T (I know that's their hope), and I know that that's the case with me.  They've been about as good as I can expect, and I certainly wouldn't jump ship to Verizon unless they got iPhone exclusivity and I couldn't unlock that bad boy.
Posted by Beau Sorensen at 3:59 PM No comments:

Email ThisBlogThis!Share to TwitterShare to FacebookShare to Pinterest
Labels: business

Will Someone Please Think About the Vegetables! 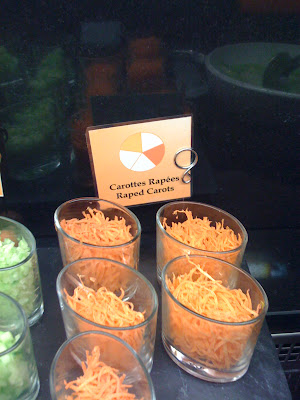 I was recently at the Hilton Arc de Triomphe in Paris having a nice leisurely breakfast when i came across this on the buffet line.  That's right, raped carots.  I don't know how they were raped, but I know that it wasn't worth tasting them to find out!
Posted by Beau Sorensen at 8:53 AM 2 comments:

Another IT tale of wont and woe...I had someone come in a few weeks ago and tell me that their computer was just a black screen.  I said we'd had a power outage before they got in, so they'd need to make sure they turn their computer and monitor back on.  They said that they'd done that already.  I was in a meeting but told them I'd be there in a few minutes.  Before I was able to get to it, one of my colleagues did.  This person said they'd pushed the power button and demonstrated it to the person who was helping them.  It turns out that the "power button" they had pushed was the button to eject the CD-ROM drive.
Posted by Beau Sorensen at 9:33 AM No comments:

Ladies and Gentlemen, Our Marketer!

Here's a gem from our marketer.  We're considering getting a new logo and the head of marketing just said "it doesn't matter what our logo is because we're not a national company."  Yup, he's our marketer!
Posted by Beau Sorensen at 12:28 PM 1 comment:

I'm back from a massive Europe trip, so I've been quiet for a time.  I came back and found that Adam Lambert is gay in some great investigative reporting by Rolling Stone.  Wow.  I don't think anybody thought that someone with a Steve Perry-esque voice and the flair of Carol Channing was straight, as Adam himself said.  Another amazing piece of journalism along the lines of my previously posted People revelation: 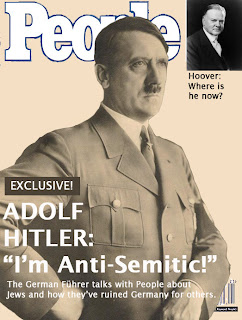 Posted by Beau Sorensen at 12:24 PM No comments: