I went to the Utah Republican Party Convention on Saturday to help out a few candidates with their campaigns, but I made sure to get some photos while I was there.  All were taken with an Nikon D700 at 3200 ISO. 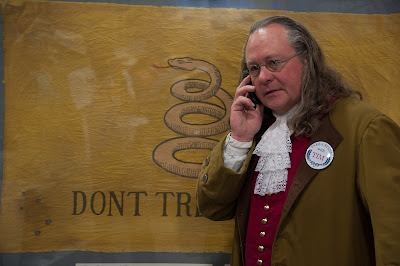 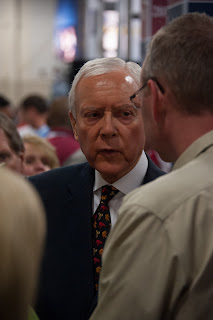 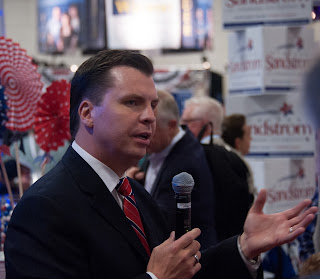 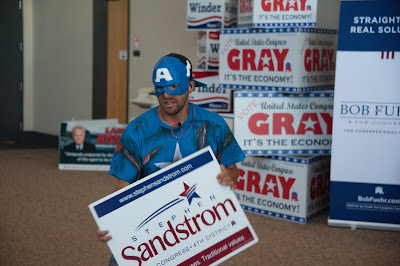 I guess Sandstrom thought if it works for Salisbury Homes and Little Caesar's Pizza, it must work for him too! 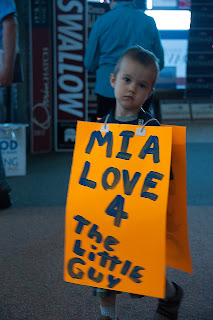 The image is a bit blurry, but his mom told him to smile for the photo after this.  He clearly wasn't the happiest camper in the world!
*Note: I know Ben Franklin didn't invent the cell phone.

Utah Republican Party Convention by Beau Sorensen is licensed under a Creative Commons Attribution-NonCommercial-ShareAlike 3.0 Unported License.
Based on a work at sorroforro.blogspot.com.

Posted by Beau Sorensen at 10:09 AM No comments: 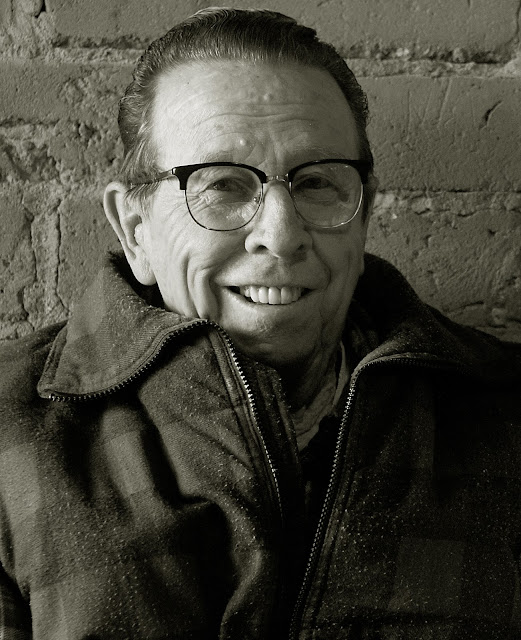 One of the areas of photography that I'm really working on is getting good portraits.  My kids are part of what's driving it - my daughter is a poser extraordinaire, but my sons are no good at it, so I have to be good at capturing it.  This is an image of my grandfather that I took at a restaurant with surprisingly good lighting.

Jolly Old Fellow by Beau Sorensen is licensed under a Creative Commons Attribution-NonCommercial-ShareAlike 3.0 Unported License.
Based on a work at 1.bp.blogspot.com.
Posted by Beau Sorensen at 8:59 AM No comments:

Email ThisBlogThis!Share to TwitterShare to FacebookShare to Pinterest
Labels: photography 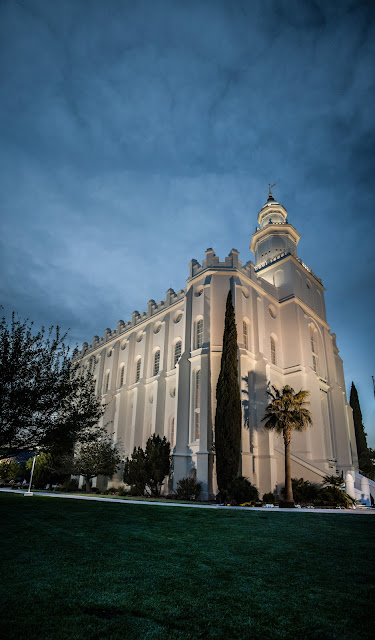 Rachelle has told me I ought to start posting some of my photos on the blog since it doesn't get as much use anymore as a "stuff to say" outlet.  This is an image from just a few days ago when we were in St George.  The temple there has been around since 1877 and they somehow manage to keep it extremely white.  I don't know how with the copious red dust, but they do it!

St George Temple at Dusk by Beau Sorensen is licensed under a Creative Commons Attribution-NonCommercial-ShareAlike 3.0 Unported License.
Based on a work at 2.bp.blogspot.com.
Posted by Beau Sorensen at 5:51 PM No comments:

So You Want to go to Tokyo 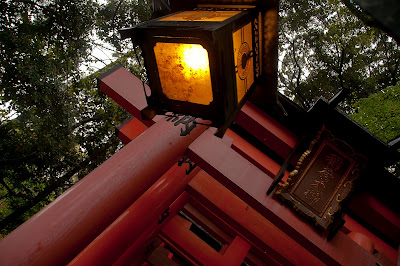 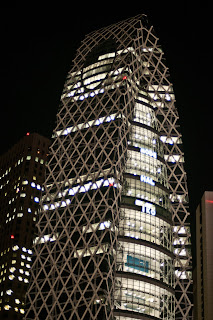 Shinjuku.  If you like skyscrapers, this is the best part of the city for them.  It's the most stable ground in the area, so as a result most skyscrapers were built here.  Some interesting buildings of note are the Tokyo City Building, the Park Hyatt Tokyo, and Mode Gakuen Cocoon Tower (shown here)
Roppongi.  More foreigners spend their time here due to the proximity of the US Embassy, and as a result, there is a lot to see.  Be cautious, as it's not a criminal area per se, but it is one where you may want to avert your eyes from time to time as it's a prostitution and seedy nightlife hotbed.  They do have Roppongi Hills (a 55 story building with a great cityscape view - if you're looking for sunset shots with Mt Fuji in the background, this could be the place to get it.  It's about $10 to get to the observation deck) and Tokyo Tower though, so it's worth a trip in.
Inokashira koen.  If it is still hanami (cherry blossom season), this is the place to see and be seen in Tokyo. It's outside the south exit of Kichijoji station on the JR Chuo line.
5. I want to get out of the city for a day.  Where should I go?
There are 3 very doable daytrips out of Tokyo and one that is more difficult that are worth considering. 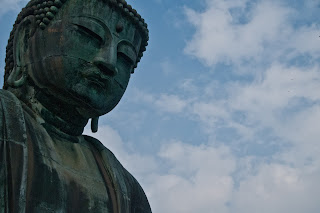 1. Kamakura.  Kamakura is the former capital of Japan and is unscathed despite the calamities that have befallen Japan in the last 100 years.  It's approximately 90 minutes from Tokyo and it's got some amazing buildings and people seeing that you will not get in Tokyo.  If you want to see Japan as the tourist brochures see it, this is the place to go.  Consider traveling in via the JR Yokosuka line from Tokyo or Shinagawa stations, getting off at Kita-Kamakura, and walking past some of the best Japanese shrines - Engakuji, Meigetsuin, Kenchoji, and Hachimangu, on your way to Kamakura station, where you will take the Enoshima line to Hase, where you can see the daibutsu (a huge metal buddha statue) and Goryo shrine, which has some great views of the city. 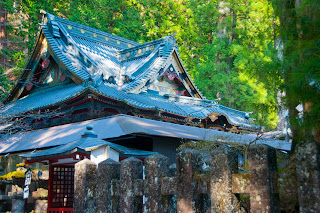 2. Nikko.  Nikko is more difficult to get to than Kamakura, but if you don't mind, it's amazing.  You can take the bullet train to Uchinomiya, then transfer to a small local line to Nikko if you have a JR pass or take the Tobu Nikko line from Asakusa to get there.  Either way, it's about 2.5 hours outside of Tokyo, so it's a bit more time consuming.  If the cherry blossoms are gone in Tokyo though, you have an excellent chance of seeing them here.  The highlight of Nikko is the UNESCO World Heritage Site that includes the shrines and temples built by Tokugawa.  Out a bit further is the Nikko National Park, which has some amazing sites as well.
3. Mt Fuji.  Unfortunately I've never done this, so I can't speak to it, but it's supposed to be phenomenal.  You can take the bullet train from Tokyo to Odawara and then take local lines from there into the park. 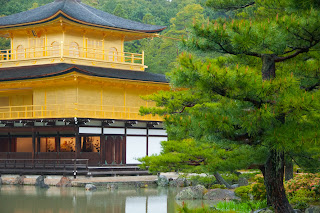 4. Kyoto.  Yes, Kyoto is about 3 hours away by bullet train.  Yes, it's a really long trip and a lot is just scenery passing you by.  Yes, Kyoto is amazingly worth it.  If you were to do this, you'd want to take as early a train as possible so you can fit in as much as possible.  My wife and I did this as a day trip and it worked.  Kyoto has a good bus system that will get you to the prime sites (Kiyomizu dera, Kinkakuji, Ginkakuji, Nijo castle, and Ryoanji) and there's a lot more to see here.  Really, it's not a day trip, but if you want to see this and you don't know when you'll be back, it may be worth the trip.  If you do come down here from Tokyo, consider the Japan Rail Pass.  It's $340 for 7 days, but you'd spend that on one bullet train trip.
6. I want to eat.  Can I do that?
Eating is easy in Japan!  You can eat any non-Mexican food at any price point you want.  You may want to consider a yakiniku (grill your own meat) place - though if you do, do it at lunch as it's significantly cheaper.  Yoshinoya is a chain of meat bowl places that is available around the country, and they are really good.  In addition, there are vending machines and convenience stores on almost every corner, and they have a lot of things available to satiate your hunger.
7. Packing.
See my earlier post on this topic!