Posted by Beau Sorensen at 7:21 PM No comments:

Having a British Baby: One Mother's Story

I know that this is terrible form, but Ryan will be okay with it. He and his wife moved to the UK a while back and you can read his thoughts back at the original post. His wife's comments were copied and pasted from her blog, so we're now 3 removed. Nevertheless, here's what the future could look like in the US. Maybe not, but see what you think:

Often when I heard hard luck cases or anecdotal experience I chalked it up as just that. I even wrote on this blog in the past about some of my colleagues negative experiences. Rather than recount my own views of the birth, I thought I'd just share with you what my wife posted on her blog. Sorry, but it is going to be long.

- At prenatal checks they never weigh you. I had to request to check my weight a couple times just because I was curious. So I don't even know how much weight I put on this pregnancy!

- Most women never see an OB/GYN - you are seen by the community midwives for all your checkups. You would only have an OB if you are an at-risk pregnancy or would be having a scheduled c-section.

- They don't check dilation/effacement until you are in active labor; leaving you with no clue when the baby may come!

- The prenatal checkup schedule is much less frequent than in the US. Even at the end of pregnancy you only see the midwife every-other week.

- When I had my glucose tolerance test they have you buy your own "gatorade" and bring it to the lab to drink for the test.

- They asked me if I'd like to have a home birth, and they're actually pretty common here. I said "NO" - I'd much rather have all the equipment and help that a hospital has...oh, and I don't want to have to buy a new bed after delivering the baby in it!

- I don't think I saw any computers in the hospital while I was there. I am so used to seeing a computer with monitors in every labor room, plus several at the nurses' station for charting. Everything is charted on these little blue notes that you carry around with you during your pregnancy and while you are at the hospital.

- While in labor, they don't have monitors to check the baby's heart rate or your contractions. The midwife would occasionally put a doppler on my tummy to listen to the baby's heartbeat, but nothing continuous, and as I said before, no computer read-out or printed reading.

- The doctor on the delivery unit placed my IV for my antibiotics - and totally missed the first time - badly! I still have an ugly, huge bruise. Good thing I was in labor so the pain was minor in comparison!

- The bed I was in for delivery had no pillows, the left stirrup was broken, and it took 2 midwives the better part of 5 minutes to figure out how to put the bed together. Maybe they should not use that room next time!!

- They offer Nitrous Oxide as a method of pain relief. I used some while I was being stitched up and I really think it was just oxygen. It did NOTHING! The only benefit was that you suck it out of this plastic mouthpiece, so I was able to bite on that while the doctor (same one who botched my arm!) was taking his sweet time with the stitching - oh, and not numbing me up properly. He kept saying "This would be a lot better if you had an epidural" - um yeah! You're telling me!! As you can see, I was not impressed with this doctor...maybe it's a good thing I didn't get an epidural...if he was administering it I may be paralyzed!

- My midwife Tina was amazing. She was so kind and really helped me to calm down while experiencing my very quick, unexpected, natural delivery. There was no "team" of doctors and nurses in the room when Ellie was born like in the US - just Tina and Ryan. It's a good thing Ryan wanted to cut the umbilical cord, because if he didn't do it I don't think there would have been enough hands to manage it all!

- They don't give you a hospital gown! You are told to "bring your own clothes to deliver in". Minutes before Ellie was born I finally took my pants off and my new baby was placed on the very shirt I wore into the hospital. Afterwards you just wear your own clothes or a nightgown. I'm a pj pants girl, so I had to go out and buy a nightgown especially for the occasion.

- I wasn't stitched up after the delivery for what seemed like a very long time (long enough to call both our families) - I was telling the midwives that it must not be too bad a tear or I would be losing a lot of blood!

- Babies aren't measured for length. I asked why and was told that "length doesn't matter" so they don't do it. Everything has to be very cost-effective in a national healthcare setting; length doesn't have any particular health implications, so they don't check it.

- You can leave the hospital any time you want after delivery (as long as everything checks out okay). I had a roommate (yes, a roommate - more of that to come) who delivered a baby at 4am and was gone before noon.

- There is no baby nursery, which means they don't bathe the baby after the birth, and don't keep them in there while you sleep. You have to keep your baby with you 24/7 - if you go into the bathroom you just wheel your baby along with you.

- They don't give you any diapers, wipes, onesies, or pads in the hospital - bring your own!

- I was lucky to snag 1 of 2 private rooms in the "mother/baby" unit (someone tipped us off beforehand that we could at least try and ask for one), but sadly was moved that first night because someone needed the room more. My new room was a big room that can hold SIX moms and their babies, only divided by curtains, with the bathroom down the hall. Luckily, there was no one else in there when I first came in, and at most there were 3 of us - but still slightly uncomfortable nonetheless. No privacy, and I felt badly when Ellie would cry knowing that she was probably waking up someone else's baby. Utah Valley hospital is like a hotel compared to the hospital here!

- When you come home from the hospital, midwives come to your house to check up on you and the baby 1 day, 5 days, and 10 days later. They see how everything is going, how you are healing, weigh the baby, and answer any questions. I LOVE this! It's very reassuring to be able to ask questions and make sure you are doing things right; I think I question myself more this time around because I'm always comparing the 2 kids.

One of my passions is photography, and as such I go to a few sites to get information on how I can improve.  My favorite is Scott Kelby's site.  He had a contest recently where people could submit their best sports shots and get a chance to shoot on the sidelines of a Florida State Seminoles football game with one of his colleagues.  The winner won, life was good, and then professional photographers decided that having him on the sidelines was wrong.  My question is why the outcry (and there has been a lot...check out some of the posts here and here), anger, and vitriol slung at the contest winner and sponsors.  They did something nice for somebody, regardless of the reason and all you can do is denigrate them and what they do to make you feel better.  I wish that they had been more constructive with their criticisms, because they might have had valid points.  The problem here is that they've walked into a gunfight with a knife.  Kelby's stuff is far more widely read than this group of photographers are (although perhaps they're more seen) and as a result, he can level them in one blog post and that makes them look like a bunch of whiny, spoiled dinosaurs who are trying to protect their turf rather than innovate.  You could call that breed of sports photographers GM - instead of innovating against Toyota, they circled the wagons and didn't listen to what people were saying.  They went from over 70% market share to under 30% in 40 years and if these photographers don't watch out, they'll do the same.  If they want to be replaced by amateurs with D90s, all they have to do is keep their heads in the sand instead of innovate.
Posted by Beau Sorensen at 8:55 AM No comments:

It's been a while since I've posted. Allow me to list some excuses:

I could go on, but won't. I do have a big health care post that I'd like to get up sometime soon, but it's a complicated issue, and thus a complicated post.
Posted by Beau Sorensen at 3:44 PM No comments: 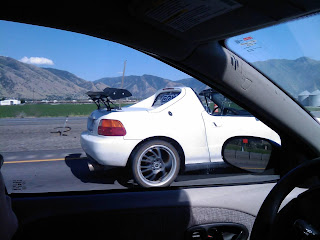 Here's a CRX with a touring wing that looks more at home on a Boeing 747 than on the CRX this guy was trying to pimp out.
Posted by Beau Sorensen at 11:11 AM 2 comments:

Travels to the Land of Obama

I say the land of Obama because Hawaii has claimed him as only Illinois should.  Nevertheless, I went with the family and we had a smashing time.  The kids were great, which furthers my hypothesis from earlier trips with them that kids are resilient travelers.  A 6 hour flight and 4 hour time change?  No problem!  An overnight flight?  That's easy!  It's shockingly amazing.  At any rate, on to some photos 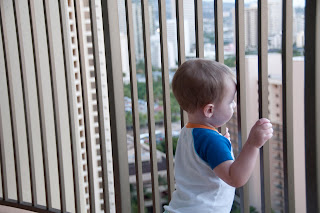 My son is imprisoned on our lanai.  He wanted to go to the beach until he actually saw the ocean.  Then he wanted nothing to do with it. 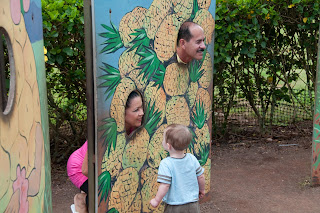 My son thought pineapples weren't people, or something like that. 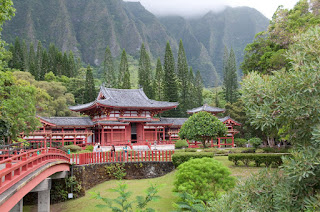 Who'd have guessed they would have a Japanese temple on Oahu?  They do, and it's got koi fish and everything.  It's kind of like Tokyo Disneyland, only without the rides and mice. 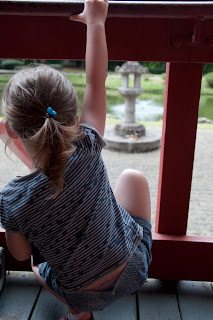 My daughter at the temple.  She loved playing around here for a bit. 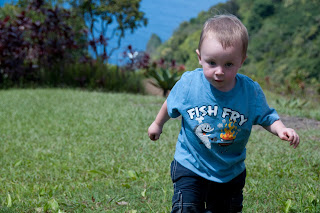 My ever determined son.  I think this is the only picture where I got his whole face because he's usually hauling along ahead of everyone else. 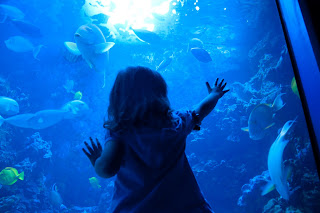 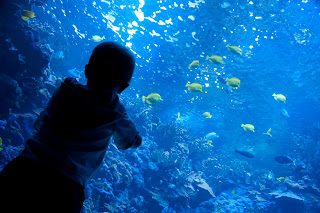 The kids at the aquarium.  I've found that kids are great photography subjects, as long as you are really quick on your shutter button.
Posted by Beau Sorensen at 3:58 PM 1 comment: