At our company we have an affinity for giving things that don't need names names. For example, we have a set of articles that people can read. It's name? The Einstein Project. We've got a training video that people are making. It's name? The Hollywood Project. There really is only one proponent of this, and it's St. Maxwell. For some reason he loves to put names to all these things that don't really deserve names. Really, it reminds me of my time in Japan. We had missionaries who couldn't live without calling their pet project something really cool. I lived through tales of the Ammon Project (show people videos) and then actual live renditions of the Abinadi Project (pictures on a felt board) and the Samuel Project (text and pictures on a sandwich board). I wanted to create the Korihor project, but couldn't ever think of anything to do that would be project-y enough (knock on doors! talk to Japanese people!).
Anyway, as a result, Forro and I have decided to retroactively apply project monikers to all the things we do. Our changing from regular phones to a VOIP system is the Discovery Channel Project, the decreasing of cell phone bills is the Alan Parsons Project, and switching from a ridiculously ghetto local bank to Chase is Operation Greenspan. It's all in good solid mockery. The only question is is it better to use the military style "Operation" nomenclature or the JTSM "Project?"
Posted by Beau Sorensen at 9:39 AM No comments: 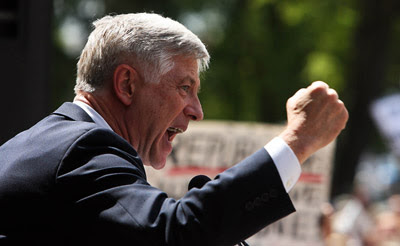 Who else is sick of Rocky Anderson? He used to just bug people here in Utah on a local or state level with his inane plans (i.e. carry a little orange flag with you when crossing the street) and I would imagine that he'll probably come out with a plan to make all Salt Lakers wear nametags before too long. Anyway, while he was always a bit kooky, he took it up a notch with the beginning of the fifth year of the war in Iraq. He made a extremely repetitive and boring (say "That is not an American value," repeated 50 times) speech at City Hall at the head of a protest rally the day of the anniversary and then he went on O'Reilly last night to promote his "impeach President Bush" campaign.
Why does he want President Bush impeached? Because he is defying the International Criminal Court for one, never mind that the US is not a signatory on the ICC - for this kind of reason. Can you imagine having the President of the United States dragged in front of a kangaroo court for prosecuting a war? We might as well torch the Constitution right now (because the Constitution...Is not an American value - thanks Rocky). Sure the Constitution says in Article VI that treaties are also considered the law of the land, but if a signed treaty goes against the Constitution, what says it? I say Constitution trumps treaty, especially one so ill-concieved and boneheaded as the Kellogg-Briand Pact. It renounces war as an instrument of foreign policy. I assume that means without (today) the UN's approval - which I think President Bush actually got, what with the 14 resolutions passed threatening military action against Iraq for repeated violations of the end of the Persian Gulf War. He also mentions the abuse of Executive power, i.e. by letting Congress authorize a war against Iraq and then prosecuting it to his discretion and allowing Congress to send through spending bills for it. Hmm, I wonder where it says the President can't do that. I do know that the Constitution says the President is the Commander in Chief of the Armed Forces, which does mean he can utilitze them as his own personal army (hence the whole CIC business) if he wants to.
Second bone to pick against Rocky. In Daily Kos' transcript, Rocky mentions 650,000 deaths attributable to the invasion of Iraq. 650,000? Did he get that number from a mental patient? Perhaps he pulled it from his butt, because that overestimates even the high numbers from say Iraq Body Count, which has some system of doing things instead of just pulling a WAG from the sky. He's only off by a factor of 10 here.
Third: he represents the city of Salt Lake. He's paid to help the city and run it. Is participating in peace rallies every day from here to Bangalore doing that? I don't think so. Shut your yap and govern your city. If you want to be the US' official peacenik to the United Nations, feel free to resign your post and do that. Otherwise, do your job.
Posted by Beau Sorensen at 8:47 AM No comments:

That is a ton of stuff! While I think that the US has made plenty of mistakes during the Global War on Terror, preventing some attacks like this instead of sticking our heads in the sand has made it worthwhile. Just imagine the terror that would be a part of our daily lives. Sure, we could pull out of Saudi Arabia, have not invaded Iraq, and so forth, but that doesn't help. Look at Israel. Despite their legitimate attempts at separation and giving the Palestinians Gaza and the West Bank, they're still under a legitimate daily threat from extremists for daring to exist.
Some might say that he was either under duress and just confessed to everything because he is playing Marwan on 24, and CTU did a bang-up job of roughing him up, but some of these are plots that nobody ever knew about. Did he just toss some stuff in there for the fun of it? I think that they want people to know what they've done because it will terrorize people (hopefully). It may not be the most current of information, but since the point of terror is to terrorize, knowing nowhere is safe meets that objective. Therefore, there's no point in lying about it, and possibly no point in putting him under duress, because he wants people to know. I'm not saying that there wasn't a Lynndie England there during some sessions, but I do think it wasn't that hard to get out of him either.
Posted by Beau Sorensen at 4:38 PM No comments:

I got a chance to go to the Eric Clapton concert in Salt Lake a few nights ago, and what a treat. While I wouldn't say it's U2 (but what is), it was a great concert. I went a few years ago when he was touring to support Reptile, but this was a completely different concert. The Reptile concert was a lot more structured, but this tour it seems like they just go out and riff their heads off, turning it into a giant jam session. It was awesome stuff. Here are a few pics I took with my cell phone: 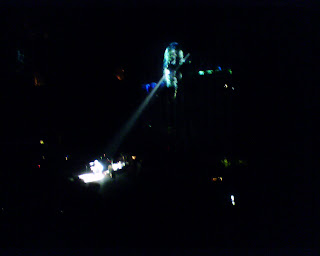 There's Slowhand doing a solo during the acoustic set. 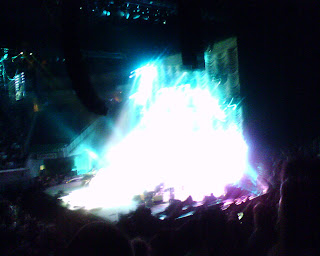 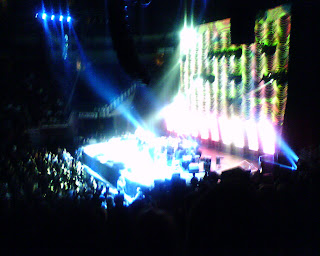 There's a couple of pictures of the stage.. While it didn't turn out quite as I would have liked, they projected images of the band on the giant screen behind the stage. 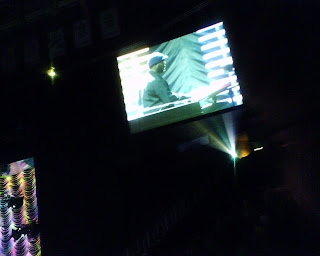 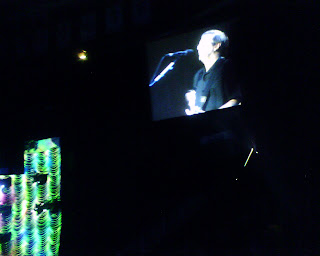 There's the video screen, with some guy on the Hammond B-3 and Clapton singing and guitaring.

Posted by Beau Sorensen at 10:11 AM No comments:

I Don't Wanna See A Knob At Night

There's two types of people in this world. People who are discreet about things, and those who flaunt their junk about for all the world to see. Of course, in general you don't see that kind of nakidity on a day to day basis, unless you live in a nudist colony. It's most noticable in gym locker rooms. I look back at my days in high school and nobody ever got any degree of naked. In the Gold's Gym locker room, on the other hand, you have people who have no business ever being without clothing (and I mean even in the shower) who walk about as though they are some sort of adonis. The following story is the most disturbing example that I've come across in all my years of going to the gym. It has scarred me in a deep and profound way for the rest of my life.
So I went in to the bathroom area to talk to a man about a horse and there was this guy, his rod and tackle out for all the world to see, blow drying his hair under the hand dryer. I could see the drying the hair bit, you know, you want to have dry hair and all that, but not the naked bit. Although, in his hand he did have a hair dryer as well. The only thing that I can think of is that the guy used the hand dryer for his hair and the hair dryer for his knob. I don't know why you'd need to blow dry your knob, but that's the only reason I can see it. Add that the guy didn't even have shoes on, so you know he was standing in urine or something like that, and it was a scene that I won't soon forget, as hard as I may try.
Posted by Beau Sorensen at 10:04 AM 6 comments: