Are You Ready for Some Hash Browns?

I know that most of the Western world has had hash browns before, but how many have had good ones?  I mean the kind that you'd pack on 30 pounds or so just to keep shoveling in your mouth.  What are the keys to these hash browns?
1. They've got to be crispy.  Soggy hash browns are the worst.  You know that they're just as unhealthy for you as the crispy ones, but somehow something got in the way and as a result you're eating strings with a texture that is approximately that of dog slobber.  They're just horrendous, and not at all worth the calories
2. They've got to be seasoned.  If you have to put ketchup on them to get them in your mouth, they've done them wrong.  They should have enough flavor that your mouth screams out for more, just like a great steak.
3. When in doubt, add fat.  My dad made killer hash browns (still does), and what made them even better?  Cheese.  Heck, add bacon while you're at it.  Bacon makes everything better.

So how can you guarantee great hash browns every time?  Not only that, but to also get them about as healthily as you can with potatoes, cheese, and meat?  Thanks to the good folks at Foodbeast, now we know. 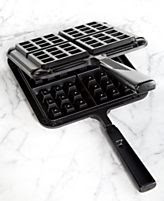 Step 1: Preheat waffle iron.
Step 2: Instead of using the stuff that they sell as "hash browns" in the store, microwave until warm and then smash up tater tots.
Step 3: Toss those tots on the scorching waffle iron
Step 4: Season All - enough to give it some nice flavor, you want to see it.
Step 5: Smash that iron down, give it at least 2 waffle cycles or until at your level of crispy heaven
Step 6: Top with cheese and/or bacon.  You can either give it another grilling or let it melt on top
Step 7: Try not to eat it all in the first minute out of the waffler.

This uses no oil!  How about that!
Posted by Beau Sorensen at 9:07 PM 1 comment: