I've Never Seen This Before 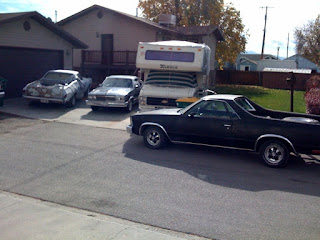 To paraphrase Ray Peterson, "No,I've never seen that.  I've never seen a house with 4 El Caminos in the driveway in varying states of disrepair."  Unfortunately my camera didn't have an ultra-wide angle lens to get the fourth.
Posted by Beau Sorensen at 4:09 PM No comments:

I was over at Engadget today and they had a video about one of the greatest inventions known to mankind: the Love Trainer.  The only problem with the device is that it makes you look completely ridiculous, ensuring that you won't be using it to improve your lovemaking any time in the near future for one of two reasons: you own it and nobody will be caught dead in the same room as somebody wearing this when things get a little risque or because you won't wear it after buying it (for the reason why, look back at reason 1).
Posted by Beau Sorensen at 3:47 PM 2 comments:

I was at the New York Times today and came across a story about the Bacon Explosion.  For the unfamiliar, you take a woven layer of bacon, then seasoning, then a layer of sausage, then cooked bacon, then barbeque sauce, and roll it up.  Then you toss it in a smoker for a couple of hours.  When you take it out, you have 5000 calories of flavor that even Homer Simpson couldn't imagine. I want to know when we should have a BBBQ with this bad boy as the centerpiece.

Posted by Beau Sorensen at 8:28 AM No comments: 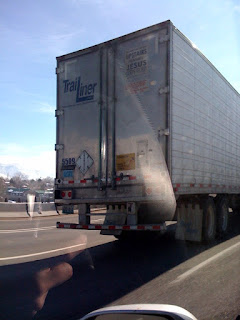 I was driving down the freeway the other day and came across this bumper sticker.  Remember, He's not the man UPSTAIRS, he's JESUS...GOD'S WORD.
Posted by Beau Sorensen at 10:08 AM 2 comments:

Is This an Ad, or an Insult?

This was on my car window the other day: 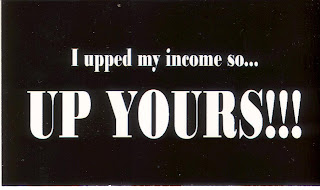 Posted by Beau Sorensen at 11:42 AM No comments:

I didn't get an opportunity to see the inauguration of President Barack Obama, but I did hear of the proceedings.  What an amazing crowd - it's like nothing I've ever seen.  To have that many people come out for the swearing in of a new president is truly remarkable and a great thing for democracy.
That being said, I was disgusted by what I heard from The Hill:


The crowd packed on the west side of the Capitol grounds serenaded President Bush in mocking fashion when he took to the inaugural stage alongside Vice President Dick Cheney.
"Nah nah nah nah, hey hey, good-bye," a section of the crowd chanted.
The crowd packed immediately below the podium received Bush in stony silence when he took his seat on the stage surrounding the podium where Barack Obama was scheduled to take the oath office to become the 44th president of the United States.

I can see and am on board with the stony silence part.  I know that the vast majority of Americans have been unhappy with the Bush presidency, and I respect that.  At the same time, can you please keep your mocking glee to yourself?  I have been subjected to classless act after classless act from the winners of the last election for over two months now, from resident MSNBC liberal harpy Rachel Maddow's "Lame Duck Watch" to crowds that can't wait to humiliate George W. Bush wherever he goes.  He's as fortunate that he's leaving as the rest of the country is.  I appreciate his service, even though I don't agree with everything that he's done during his presidency.  The bottom line is that we deserve who we elect, we elected him, and we are as much a problem as he has been.  I really hope that we will treat President Obama differently.  Let's not leave his presidency with the US looking like the proverbial National Mall after his inauguration celebration yesterday.

In Honor of the Inauguration

Barack is very disappointed with me!


I only scored 20 on the Obama Test
I'm already on the bad side of the President.  That may not be so good, with him just getting inagurated.
Posted by Beau Sorensen at 11:25 AM 3 comments:

While I agree it's not the best tactic in the world for naming your kids, using a Nazi Germany theme is no reason for the government to take them away.  Where does it stop?  Any kids named Osama will get rounded up?  Or maybe Tojo or Mussolini?
Posted by Beau Sorensen at 9:25 AM 4 comments:

Anyone up for Jumping off a Cliff?


wingsuit base jumping from Ali on Vimeo.
Posted by Beau Sorensen at 5:10 PM No comments:

If you are looking to get in touch with me via email, a few tips:

1. FW does not inspire confidence in whatever follows it because I've got too many blind forwarders in my life.

2. ...please read (or some variation thereof) is even worse.  Please read tells me that your email is of no value whatsoever, that's why you had to beg me to read it.

3.  When you combine the two, you are headed into the recycle bin straightway.
Posted by Beau Sorensen at 12:05 PM 1 comment:

If there's one thing that people know about me, it's that I love free stuff.  I posted about Ebates a while back and have continued to use them as my main cash back location of choice, but something else to consider is branching out a bit.  The past few months, I've expanded my options based on store availability, percentage of cash back, and other options and I've been handsomely rewarded as a result.  Here's how I would structure my online shopping:
Ebates.  I still consider them the granddaddy of the online kickback revolution, and I still use them the most.  They either deposit money in your PayPal account or send you a check every 3 months.  They seem to have the largest breadth of stores, and they give you that swank signup and referral bonus.  In a year and a half of actively using them, I've gotten $1475.
Fat Wallet.  These guys have a better selection in some areas (notably eBay and hotels), and since I book travel here at my company as one of those vestiges that I hang on to from other positions I held, that's a big deal.  I started with Fat Wallet four months ago and have got $300 in cash back from them during this time.  They send you the money via deposit in your PayPal account 90 days after any given transaction.
Live Cashback.  This is Microsoft's entry, and as such they have deeper pockets than the other two.  Microsoft was running a deal a while back where they'd give you upwards of 30% cash back for eBay purchases, enabling me to get a 60 GB PlayStation 3 for my Blu Ray player of choice for a fraction of the original cost.  They get into some places that the other sites don't, and for the overlaps, they pay a little better.  They also deposit the money in your PayPal account after 90 days, similar to Fat Wallet.  I've gotten $240 in the two months since I started using them.
When you combine these, especially if you happen to purchase things for your company, you can get a pretty sweet little folding money stream coming in.
Posted by Beau Sorensen at 9:47 AM No comments:

My wife and I bought Rock Band 2 when it came out back in November and it's immediately become our go-to video game.  Not only does it have a massive variety of songs, but it's involving and allows everybody in the group to embrace their inner rock god.  I was a Guitar Hero fan before this, but I can see why they moved to bands, because it's a lot funner (even if I can't play the drums worth a darn).  At any rate, even with over 500 songs available, I think that there are some glaring omissions that I'd love to see a combination of the actual bands and Harmonix fix.  This really is genius - you spend 150 bucks on the game + peripherals, then you spend a bunch more on music.
Glaring omission 1: U2.  There isn't another guitarist out there who I'd rather fake play than the Edge.  I think that U2 should get on the Rock Bandwagon, especially with the imminent release of No Line on the Horizion.  They're a band who is constantly on the edge of pop culture, and for them to not be in Rock Band is incredible to me.  I don't know if the hold up is the band or the game, but we need some U2 in there.
Glaring omission 2: Led Zepplin.  Stairway to Heaven would be epic, as would a bunch of other Zep songs, but Page/Plant are notoriously tight with their masters, so I wouldn't expect this anytime soon.
Glaring omission 3: The Rolling Stones.  They have "Gimme Shelter" that you can import from Rock Band, but for one of the greatest rock bands ever, they need more songs.  What about "Paint it Black," "Sympathy for the Devil," and "You Can't Always Get What You Want"?
Glaring omission 4: Def Leppard.  These guys were huge, for good reason.  They were awesome.  I'd love to see some of their hits in Rock Band.  I'd love it even more if you had to drum one armed while playing them.
Glaring omission 5: Bon Jovi.  They have 2 songs (admittedly, 2 of their best) already, but I want to see at least a 6 pack.  That is Rock Band gold.  There isn't a man, woman, or child alive today who doesn't want to play more Bon Jovi songs in Rock Band.
Glaring omission 6: Van Halen.  This is something that I don't see getting rectified, as I've heard that VH has an exclusive deal with Guitar Hero.  Nevertheless, I'd love to see them in here.
Glaring omission 7: The Eagles.  They have the most successful album of all time, and they're not in Rock Band?  For shame.  I'd like to put in my plug for using masters from their Hell Freezes Over album, as that bad boy is amazing.
Posted by Beau Sorensen at 10:29 AM No comments: