So you've decided that it's time to rumble, have you pig nation?  You've unleashed your biological warfare on us with this new version of swine flu, and I have one response.  I'm going to make it my personal mission to eat as many of you as possible.
Posted by Beau Sorensen at 8:13 AM No comments:

Memo To The Woman in Seat 5D

You know that announcement that they make on every flight before they close the boarding door...the one that says something like "turn off your phone on this flight, it's prohibited by FAA regulations, etc, etc?"  Yeah, that announcement applies to everyone, even though Mythbusters says it's not going to crash your aircraft.  Now I understand that sometimes you forget.  That's understandable, and it happens to everyone.  The difference between everybody else and you though is that when their phone rings they look all embarassed and turn it off.  You on the other hand, let it ring loudly and THEN ANSWER THE PHONE.  This is during the final descent, and you have a 2-3 minute conversation with someone.  Even though we were on final, if I was the FA, I would have taken your phone and tossed it in the lav.
Posted by Beau Sorensen at 7:14 PM No comments:

15 Minutes Could Buy You Better Advertising 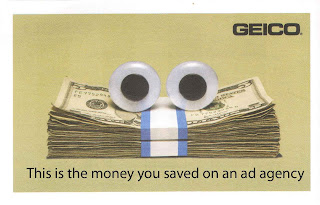 There are some companies that just annoy me.  For whatever reason, be it lousy customer service, allegiance to some sort of ridiculous something-or-other, or bad advertising and branding, they just grate on me.  One of these companies is Geico.  It's not that their gecko has gone from an Queen's English speaking lizard with a beef against people calling him rather than Geico to a cockney accented spokesanimal talking about just how great it is.  It's not that the cavemen are doing whatever it is that they do.  It's not even that they have a spokesman that does nothing other than sit there.  It's that they have all of the above at the same time.  It's so schizophrenic that it drives me up the wall.  It was bad enough when they just had the caveman and gecko, but it seems like someone was sitting around in their marketing department trying to justify their salary.  I can imagine the conversation with his supervisor after he spent all of a minute and a half thinking .
Marketer: Sir, I think that I've got a brilliant idea of how we can up our advertising.
Boss: Okay Jim, what is it?
M: What if we got a new spokesman?  The gecko and the caveman are a bit long in the tooth.
B: Fair point.  So we'd replace them with something new?
M: No, we'd add something and keep the others around.
B: Why would we do that?  Isn't that too many options?
M: Car insurance has lots of options, so our marketing should too!
B: Fair enough.  So what's this new mascot?
{pause as the marketer pulls out 2 small stacks of bills and a pair of googly eyes and places them triumphantly on the boss' desk}
B: BRILLIANT!!!

No, not really...anybody could do that.  I've got a DVD case, maybe I could slap some wax lips underneath it and have it become DVD man, which would help people save on their DVD purchase.  Columbia House, the offer is open if you want the idea.
Posted by Beau Sorensen at 5:02 PM 1 comment:

Email ThisBlogThis!Share to TwitterShare to FacebookShare to Pinterest
Labels: business

Here's an actual email I got today:


Hi;
my name is miss Brenda

I saw your profil today at [redacted] and it really attracted me alot,i will like to know you.please Do write back.
For more convenient ;hope you will write back.
Until then; kisses;
Miss Brenda.


This is amazing.  I love the Miss Brenda - it sounds like some sort of Hollywood madame.  The spelling is clearly top notch, as is the punctuation and capitalization.  I really think I should respond, but will Miss Brenda reply, or is it just a spambot?  Maybe my wife could answer the question.
Posted by Beau Sorensen at 5:53 PM 4 comments: 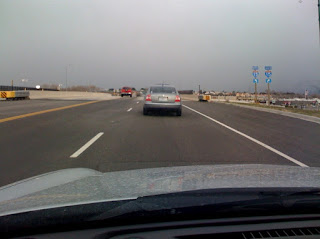 I know this is hard to read, but trust me when I say that this license plate says SEREN T.  I can assume that they are trying to say "serenity," because that's close enough.  My guess is that SERENIT is probably taken as that's the most logical, but what about SRNI T or SRENITY?
Posted by Beau Sorensen at 1:44 PM No comments:

I love that somebody finally stood up to the pirates in Somalia.  First, the crew took back control of their ship, and then the US Navy used SEAL sharpshooters to kill the remaining pirates when it looked like they were going to kill the captain of the Maersk Alabama.  There are two reasons that piracy is suddenly all the vogue in the Horn of Africa.  One is that massive amounts of cargo and oil go through the Suez Canal and the Gulf of Aden is a natural chokepoint.  The second is that resistance is light and rewards are big.  In exchange for holding people, they got a payoff from the companies who's cargo they were holding.  That's a pretty sweet deal.
Now things have just been taken up a notch.  While pirates have said that they would perhaps start killing crew, everybody's asking the US Navy for help.  Rather than the Navy, the shipping companies should help themselves.  The first step would be to actually arm a ship.  A good first step is a small arms locker with assault rifles and the like combined with training for the crews.  A better move, in my opinion, would be to forgoe half measures like that.  The pirates would still be able to outgun the crew of a vessel, and that would just lead to a lot of killing on the high seas.  Instead, because there are 2 locations where piracy is a big issue - the Gulf of Aden and Indonesia, I would contract with a PMC (i.e. mercenaries like Blackwater) to provide security on board in those areas.  It would be a short term issue where you could airlift some personnel to the deck and then back off.  This way you don't have to pay for them to be onboard when they aren't needed.  In conjunction with this would be some serious security measures - vulcan cannons, surface to surface missiles (or RPGs - nothing too big), and other heavy arms to force the pirates to either give up piracy, look for softer targets, or spend the money to buy more serious weapons.  I think you might find some who get in an arms race, but the majority couldn't outspend a corporation and after some serious losses, you might find piracy dying back down again.  I don't know why they haven't done this yet, but it's the most immediate solution I can think of that should solve the problem (at least for that shipping company).
Posted by Beau Sorensen at 1:30 PM 2 comments: 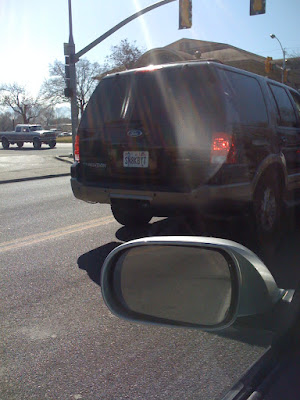 Here's the first in a sporadic series of moronic license plates.  This one is SN8KBYT - I can only assume it's supposed to be "snakebite", or perhaps they're internet savvy, so it's snake byte.  Nevertheless, it comes out as sneightkbite.  What about, SNKEBYT or SNAKBYT or SNEKBYT?  They're still a little off, but not like sneightkbite.
Posted by Beau Sorensen at 4:37 PM No comments:

Email ThisBlogThis!Share to TwitterShare to FacebookShare to Pinterest
Labels: idiocy 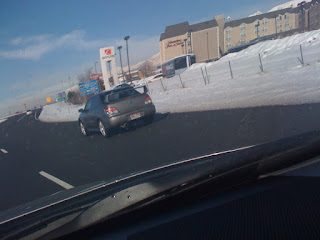 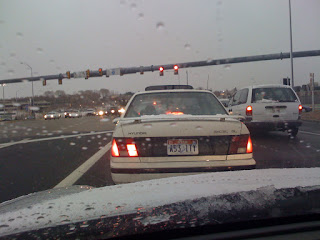 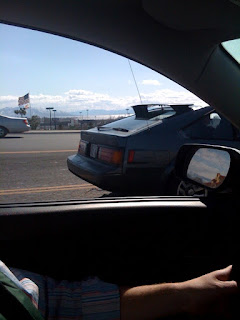 The spoiler up top seems to be indicative of your typical Subaru WRX...big and doubled.  The Hyundai's isn't especially egregious, except that it's on a Hyundai.  Finally, I love the ghettoness and placement of the spoiler on the Celica.  Awesomely white trash on so many levels.
Posted by Beau Sorensen at 11:00 AM No comments: