Don't Get Insurance from Liberty Mutual 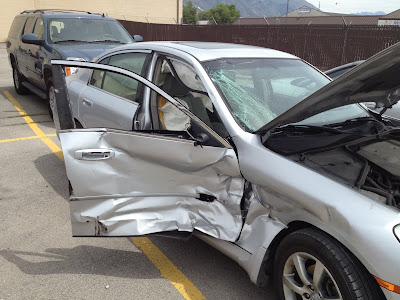 I know, I know...posts like this are a dime a dozen. Some go viral, some languish, and some sit in the middle. Nevertheless, I want to hopefully save someone some degree of pain and suffering from having to go through what I have so far.  Thus, my story begins...


May 30, 2012: I was driving along a residential road between my work and home and stopped at a 4 way stop.  I went through the intersection and was T-boned by a driver who didn't see the other stop sign and hit me at about 20 MPH.  He was driving a Ford F-250 and pulling an 8000 lb cement mixer behind his truck.  I calculated later that I was hit with 32 tons of force.  It did the damage you see above.
The police came, took statements, and left.  I called my insurance to report the accident and then called his to do the same, as the claim would go through his.  He was ticketed, he ran the stop, so it's pretty cut and dried as to who would be responsible.  They took my statement and asked me to call the other driver (their customer) to have him give his statement.  It was at this time I had my first contact with Liberty Mutual.  Their initial point of contact was Ashley, and he was very pleasant.

June 1, 2012: I called Liberty Mutual back as I hadn't heard from them.  I dialed Ashley's extension, got voice mail like I expected, then hit 0 as instructed to talk to another team member.  40 minutes later, I finally talked to a live person.  They said they would cover 100% at that time and had me authorize getting my car moved from the tow lot to Larry H Miller Collision in Orem.  They also set me up with a rental car from Enterprise after I requested it.  Based on my later conversations with them, if I hadn't said anything, I doubt I would have seen one.
I also sent the following tweet before they answered:
I've been on hold w/@libertymutual for 40 minutes now. I wonder if I'll ever get to a person.
Fortunately their social media person was on the ball and helped me to the best of her ability.

June 5, 2012: I called Liberty Mutual again as I hadn't heard any details of what would happen with my car yet.  They said they hadn't heard from the adjustor yet, but would get back with me when they did.

June 6, 2012: The car was totaled.  They called me this time, and I talked with Ashley again.  He said that he was finished with the claim and now it would go to their total loss department
I went to Larry Miller Collision, where the estimator told me that the damages were $14,500, which was just over Liberty Mutual's 75% threshold, so I should expect around $20,000 plus tax and title for my car.

June 8, 2012: I called and found out who my total loss representative was and to see the status of my claim.  I was told she would be back in touch with me.  They said they would cover the accident 100%.

June 12, 2012: I finally heard from Andrea Jesse about the valuation on my total loss claim.  Her estimate, based on a call to a car lot called Autosource?  $15,668.  That was the total amount, with taxes and title built in.  I told her that that was way too low based on my research, and asked for her email address to send her the documentation on that.  Below is my email to her:


Andrea,
Thank you for chatting with me earlier today.  Here is the research that I have done with screenshots and other documentation as needed:

Here are the sites that I’ve checked with regards to my vehicle.  It was in outstanding condition and had low mileage, and you can see that reflected in the Kelley Blue Book, NADA, and Edmunds quotes for replacement value via a dealer.  As is expected, based on the different people these 3 guides are targeted at (KBB as a dealer’s sticker price down to Edmunds as the actual cost that a consumer should pay if they’re a good negotiator), there is some variation.  As such, I would propose that as there are no direct comparables in the market, we should base valuation here.
KBB: $21,413
NADA: $19,600
Edmunds: $18,479
Average cost of a 2006 Infiniti G35x with my options: $19,830

From that we can then calculate the sales tax.  The sales tax for Murray, UT (where our local Infiniti dealer is) is 6.85% per the Utah State Tax Tables: http://tax.utah.gov/sales/rate/12q3combined.pdf
Before we can get that though, we have to look at the cost of additional items on the car.  I have enclosed also a copy of the contract of sale of my G35 from Tim Dahle Infiniti.  The dealer documentary service fee is $398.50.  License and registration is $205.50.  In addition, I bought an extended warrantee that took the stock Infiniti 4 year/60,000 mile warrantee and added a 3 year/40,000 mile term to the end.  This should also be factored in on a prorated basis.  That puts us at a $2195 extension prorated over 3 years at just over $60/month.  I had 15 months left at the time of the accident, thus $2195/36*15=$914.58  That puts us here:

This is in line with what your estimator at Larry H Miller Collision told me when I went in to collect personal effects from the car.  He told me damages were at $14,750, which put it right at the 75% threshold where he indicated a total would occur…which puts his valuation for the vehicle at $19,666.67 ($14750/.75).  Where your estimator using your program told me that, I believe that that’s a fair indication of what we should be looking at.

I have also attached the closest possible comparables, one from a private seller who you would expect to be lower than a dealer, and the other from a dealer.  Because my car had lower miles than either of these, and because I bought my car new from an authorized Infiniti dealer, I propose the dealer value as that is where I will be going to replace my car.  Therefore, using the dealer valuation, plus transfer fee as a base is the minimum necessary for me to leave this transaction feeling good about things.
Carmax Infiniti G35x: $18,748
Transfer fee from Oak Lawn, IL to South Jordan, UT: $699
Remainder of the warrantee on my car: $914.58
Dealer Documentary Service Fee: $149.00
License and registration: $205.50
Utah State Sales Tax (South Jordan, UT): $1294.76
TOTAL COST OF REPLACEMENT: $22,010.84

This leaves us with a narrow range of possibilities – essentially between $22-23K.  I know that your job is to secure the lowest cost for Liberty Mutual in regards to this payout.  My job is to cover the cost of a replacement vehicle that is comparable to mine.  Thus, I would propose the following: we split the difference at $22,500.00.  I honestly will not accept anything lower than $22,000.  I feel that the estimate you gave me earlier today was not honest, and I have talked with a former insurance General Adjuster and with an uncle who is a used car dealer and both said that this was a very low offer.  I don’t feel that I am being unreasonable, considering that this is the actual cost to replace my car, that I was – through no fault of my own – hit by one of your members, that this was my dream car, purchased brand new with 8 miles on the odometer (enough for it to be tested and driven on/off of a boat and car carriers), that I have no chance of doing that again, as the vehicle is no longer in production, and with several factors not considered in my above valuation (tires I bought 6 months ago for $550 and an iPhone integration kit that cost $185 for the product + install).
Therefore, at this point it is my opinion that it is most advantageous to Liberty Mutual and its associated stakeholders to accept this valuation – by continuing to dispute and fight it, it prolongs the cost of the rental car, it costs time and money in the form of your salary and that of your associates, and if it were to drag out long enough, it would take additional time billable at $200/hour or so from your corporate attorneys.  In addition, the longer the time it takes to resolve and the more that you all try to dicker over a very reasonable Replacement Cost Value, the more frustrated I get – which isn’t good for future business, especially in our social media driven world.  As a result of these factors, I feel that it would be better instead to come to a quick agreement that minimizes the cost associated on both our sides.

Thanks for your time, 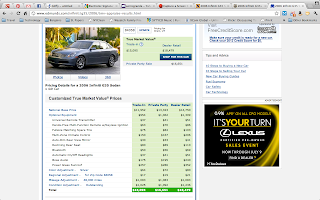 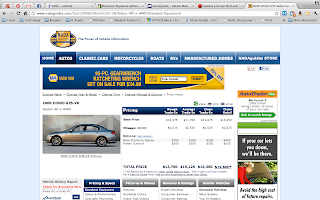 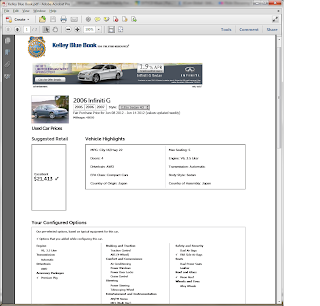 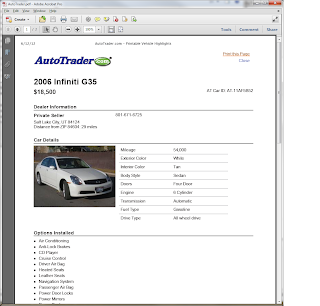 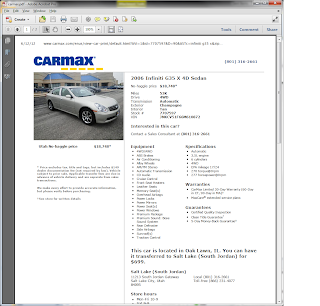 June 14, 2012: I heard back from Andrea Jesse.  She said that the quotes I had sent her were lower than what she had offered, but nonetheless, she talked with her manager, Mike Curtis, and they were willing to generously offer $18107 for my car.  I said I didn't see how that was possible as the quotes I sent were higher than what she said, when she said those 2 magic words: "trade-in value." I asked her why they were offering trade-in when I should get the Replacement Cost Value of the vehicle.  I'm not trading in my car, I wasn't planning on doing so for a long time.  Therefore, you're giving me $4000 less in value because you're not valuing it on the Replacement Cost.  She said to contact my insurance company.  I told her that I would and that I wouldn't accept her offer.
I got a message from Mike Curtis saying that he heard I was dissatisfied with their offer and asked me to call back.  I did, and left a voicemail.

Here's where we're at now.  If I'm wrong, let me know here, but I can't see any problems in my logic.  Does anyone else see this differently? Right now, I'd love to see this spread far and wide because I don't want this to happen to anyone else - but I'm willing to change that opinion if I'm mistaken and shouldn't be frustrated about it.
Posted by Beau Sorensen at 6:13 PM

Ah ha! Told you how you can always fight back! Stick it to em.

What happened with Liberty Mutual and your car? A LM policy holder just hit my car and did major damage so I am trying to prepare myself for the worst!

Well at least you aren't on the other end, I was lied to my face by the people of Liberty Mutual. My Camry caught on fire and the representative that came to inspect my car since they could not move it, told me that they would help me with the replacement costs if I got a new car within a year. I just bought a new Camry, one year newer and one model higher, and now they are claiming that the value on my old Camry actually dropped since it was last appraised. I don't understand why they lie about things when I could have gone out and bought a little cash car and spared myself all these headaches.

Catherine,
I ended up going through my insurance and subrogating the claim. They gave me a very fair valuation that was way above what LM did. I also ended up with a lawyer who handled everything for me so I didn;t have to mess with it.